There are many who believe that there is one soul meant for yours, one soulmate. There are others that scoff at the notion of a soulmate at all. There are others still who believe that a person will meet many soulmates in a lifetime, people they are just strongly connected to sometimes for no particular reason at all. Is it possible though to have a soulmate one you believe in with all your heart who you never even met, who you knew nothing about for their entire life? The poet deep inside of me that I deny believes that all things are possible when it comes to the soul.
Before I really begin you are going to read this and say this is fanaticism which after all is where the word fan comes from. That drunken samurai is just a fan, a big fan maybe a little weird on this one but a fan just the same. I will say maybe that’s true. My job is not to argue with you. It’s my blog after all and these are my thoughts, my feelings, my deepest emotions and my memories. They are my stories and my truths.

The Gits formed in a small liberal arts college in Ohio. It was an odd birthplace for a punk band and a punk band they were. They didn’t necessarily look the part, but that’s the thing about punk bands there is no real look it’s about the music and its most certainly about the attitude. There were other things about this unusual punk band. They were pretty musical, they could really play but perhaps the most unusual thing about them was their singer. She was attractive, quiet and incredibly awkward. Quirky would be a good description of her. Her name was Mia Zapata. 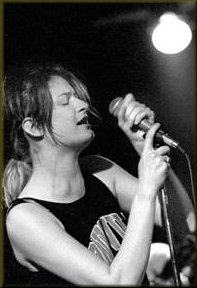 One thing became clear to the band as their music began to develop, the small Ohio college town simply was not big enough for their ambitions so they decided to embark to Seattle, Washington. Your first thought may be that they were attracted by the burgeoning grunge sound, but Seattle is so much more diverse than just a single style. Kurt Cobain had always been drawn to the punk side of Seattle music and so too were the Gits and they moved there near the punk scene into a house that soon became like punk central. They lived there, rehearsed there and allowed other bands to play as well. When a group of girls came to them wanting to play they taught them, loaned their instruments and an ear and never once offered a harsh word when 7 Year Bitch received a record contract first. The Gits slaved away led by the vocal power and lyrics of Mia Zapata and there is no doubt that the cauldron of music that was Seattle honed them, made them better. Mia could have sang any style of music, from Billie Holiday to Judy Garland but she liked the rawness of punk and her lyrics were raw as well from that deep place that only someone else who has written can maybe understand. She remained awkward on stage even though she was quite comfortable, her bandmates comparing her to a dancing chicken. Everyone loved Mia. She was the best friend anyone ever had, a sweet soul. The Gits recorded an album locally and then slowly drew interest from the big boys. The labels though wanted to do more than just record the Gits, they wanted Mia. They wanted her to do some solo work which she was already doing a bit of just her and a guitar.

It was around 2 am on July 7, 1993. Mia had a lot to be excited about. The band had recorded their first big label album and things were looking up after a lot of really hard work. She was a little down that night having recently gone through a break up and the new album and the new expectations were a lot to deal with, for anyone to deal with but mostly she was excited. She said goodbye to a friend and began walking home. It was familiar turf and everyone knew her. She had headphones on and was listening to music. She was taken by a beast of a person barely human, an ugly beast who did terrible things and took her life, took her away before she had barely begun. This horrible beast would go unpunished for years. It would be ten years before he was caught, tried and convicted, ten years of friendships, 10 years of laughter, 10 years of really bad horribly delivered jokes because Mia was terrible at telling jokes, 10 years of music that might have been of awkward chicken dancing. Ten fucking years without her being on the planet.

When the investigation of Mia’s murder began to grow cold a benefit concert was held in Seattle to raise money to hire a private investigator. Joan Jett took the project on and even toured with the surviving members of the Gits as Evil Stig (Gits Live backward). Kurt Cobain too performed, one of his last before his death. Punk music meant a lot to him and he loved The Gits

Mia left music behind, which is forever there for people to love, to listen to and new people can find her the way they do. Yet her star was not huge no matter how bright it was and like so many artists like Material Issue, Nick Drake where we have lost people way too young I fear that she will be forgotten by all but those who were close to her, friends, family and bandmates. I know of a few fans who adore her and the band but unlike some stars who have left way too soon the Gits do not have a huge following now. Most of the people who remember Mia do so as some symbolic figure a heroine against rape and brutality. I am sure she would have wanted people to remember her music, who she was. I doubt many reading this will know the Gits at all and let’s face it if you don’t like punk music you would struggle with it anyway. I would like to think though that she left me to remember her. I don’t even know what led me to listening to the band for the first time, why I bought Frenching the Bully the band’s first album. Mia had already been dead 15 years when I found it. How many people are there like me. I do know that every song I heard every video clip, and the documentary about the band, every single thing I watched and listened to left my soul aching and spoke to me more than anything and I have tried, really tried to know her, one soul to another.

I know one thing, one true thing. My tortured soul and her gentle soul would have been friends. The first thing you think about when you hear someone say soulmates is oh yea he wished he could have slept with her or they would have been like some famous romantic couple but that’s not what I mean at all. Mia’s father tells a story about attending a memorial in Seattle after her death. Everyone was so heartbroken and he got desperately lost and could not find the memorial location. The flyer had asked everyone to bring a yellow rose to the memorial because it was Mia’s favorite and just like that her father saw a group walking carrying yellow roses and soon there were more and more people carrying yellow roses and he realized how many people Mia had touched how many called her a friend. It’s odd that yellow roses are my favorite flower or maybe it isn’t. I love them.

You are probably sitting there saying how stupid I am for believing a bunch of poppycock, that I am just a fan no more no less. I don’t know. Maybe all that is true. People find mocking others so satisfactory, makes them feel good. They find that hitting out at someone’s dreams or beliefs somehow fulfilling. Mostly I just think people are horribly mean to each other. I don’t care if you mock me or even make fun of me or joke at my expense. People have done this all my life. I will shrug my shoulders oh well and move on thinking a little less of you. I know what I believe I know what I feel I know my tortured ravaged soul better than you could ever know it. I remember Mia because I feel I have to. I remember her because I cannot do anything else. I remember…